Cookies help us deliver our services. By using our services, you agree to our use of cookies. More information

Period costing and cost of sales method in external accounting

Period costing and cost of sales method in external accounting / Gesamtkostenverfahren GKV und Umsatzkostenverfahren UKV in der externen Rechnungslegung
The income statement is presented either by the period costing method or by the cost of sales method. Both methods produce the same result. In the period costing method the sales of a period are compared to the total expenditures (consumption) of the same period. Since the sales are market-oriented and the total expenditures stand for the value produced, there is a difference if the production value of the units sold does not match that of the units produced. This difference shows up in the inventory changes of finished goods, half-finished goods and work in progress. 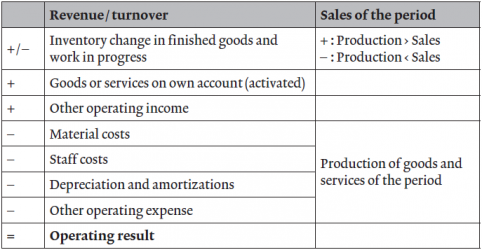 The first three positions of the period costing method combined are called total output. This is of interest in the balance sheet analysis. In the cost of sales method the sales of a period are directly confronted with the production costs of those sales. The accruals thus take place directly in the stocks. Hence the total output of a period is not recognizable anymore in the income statement. Otherwise, the accrual positions for inventory changes are cancelled. The production costs under IFRS include the proportional costs as well as the structural costs accruing for production, purchasing and material handling, including the appropriate depreciations, maintenance costs and the cost of management and administration of the functions mentioned above. Period costing presentation of the income statement is more common in the German-speaking area, the cost of sales method is popular among listed companies and rather in the Anglophone world.

Cost of sales method under IFRS:

In contrast to this accounting-driven representation, in management accounting also standard values (variance analysis) and imputed evaluations are applied in order to support decision-taking.